This workshop will focus on dynamical systems arising from algebraic combinatorics. Some well-known examples of actions on combinatorial objects are the following: Of particular relevance to this workshop are the actions and dynamical systems arising from: A unifying theme is the central role played by involutions, such as the Bender-Knuth involutions whose composition gives promotion of Young tableaux and the toggle operations whose composition gives rowmotion of order ideals. Typical questions we ask in various contexts are: Why does this product of involutions --- a permutation on a large set --- have such small order? (Or, if it has large order, why does the action nevertheless resonate with a small integer $p$ as a pseudo-period, in the sense that most orbit-sizes are multiples of $p$?) Why do certain combinatorially significant numerical functions (statistics) on the set have the property that the average value of the function on each orbit is the same for all orbits (the homomesy phenomenon)?

Some of the properties of these cyclic actions can be explained by the importation of combinatorial or algebraic models that explain why the action exists. When the cyclic action has predictable orbit structure, this program has been very successful (as seen in the recent flurry of work on the cyclic sieving phenomenon). The encoding of alternating sign matrices under gyration by fully packed loops and their associated link-patterns shows that such models can exist even when the orbits of the cyclic action display resonance and some are quite large. We hope to study further actions of this last sort, such as rowmotion on plane partitions of height greater than two.

Some examples of problems we are interested in are:

The main goals of the workshop are:

A list of workshop notes and open problems, by Sam Hopkins.

One of the outcomes of the workshop was the creation of a Dynamical Algebraic Combinatorics ("DAC") listserv. To join, send email to James Propp. 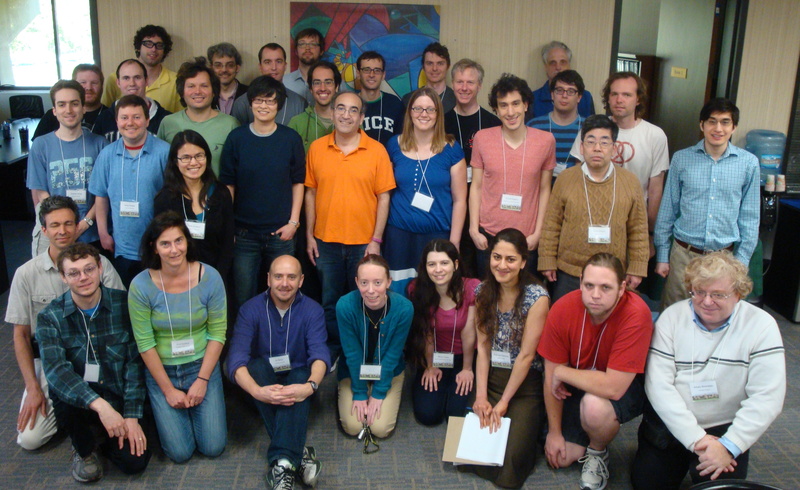