Farming in the Pajaro Valley began in 1823 when the first Spanish settlers applied for land grants from Mexico. Farming on a much larger scale began in 1851 caused in part by the California Gold Rush and the increased need for food supplies in California. The first apple orchard in Watsonville was planted in 1853 and the first lettuce crop in 1917. Apples remained one of the main crops (the characteristic taste of Martinelli’s cider is from Watsonville Newtown Pippins) until the early 1980’s when many orchards were removed to make way for vegetables and berries.

Some records date the history of water overdraft to the 1940s, but  the increase in planting row crops and berries has significantly increased water usage. In 1984, in order to help manage water resources, the Pajaro Valley Water Management Agency was formed because “Community leaders in the area recognized that local management of the basin was needed to halt seawater intrusion, which was impacting the groundwater supply for large areas of coastal farmland as well as domestic water supply wells.”

The agency commissioned the United Sates Geological Survey to study the recharge and seawater intrusion in the Valley. The USGS report identifies and describes such things as water levels, soil types, recharge areas, as well as the age, source, and movement of ground water in the region. The report noted that “Ground-water from deep monitoring wells have uncorrected ages from 1,000 to 24,900 years old and were recharged thousands of years ago and represent the nonrenewable resource in the coastal region.”
Back to main story… 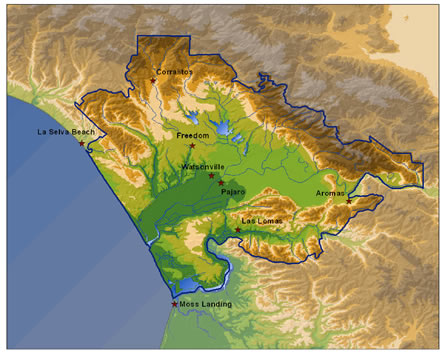