This press release in Word or PDF, and the images

San Jose, Calif., January 16, 2020 — Mathematics and science Braille textbooks are expensive and require an enormous effort to produce — until now. A team of researchers has developed a method for easily creating textbooks in Braille, with an initial focus on math textbooks. The new process is made possible by a new authoring system which serves as a “universal translator” for textbook formats, combined with enhancements to the standard method for putting mathematics in a Web page. Basing the new work on established systems will ensure that the production of Braille textbooks will become easy, inexpensive, and widespread.

“This project is about equity and equal access to knowledge,” said Martha Siegel, a Professor Emerita from Towson University in Maryland. Siegel met a blind student who needed a statistics textbook for a required course. The book was ordered but took six months (and several thousand dollars) to prepare, causing the student significant delay in her studies. Siegel and Al Maneki, a retired NSA mathematician serving as senior STEM advisor to the National Federation of the Blind, and who is blind himself, decided to do something about it. 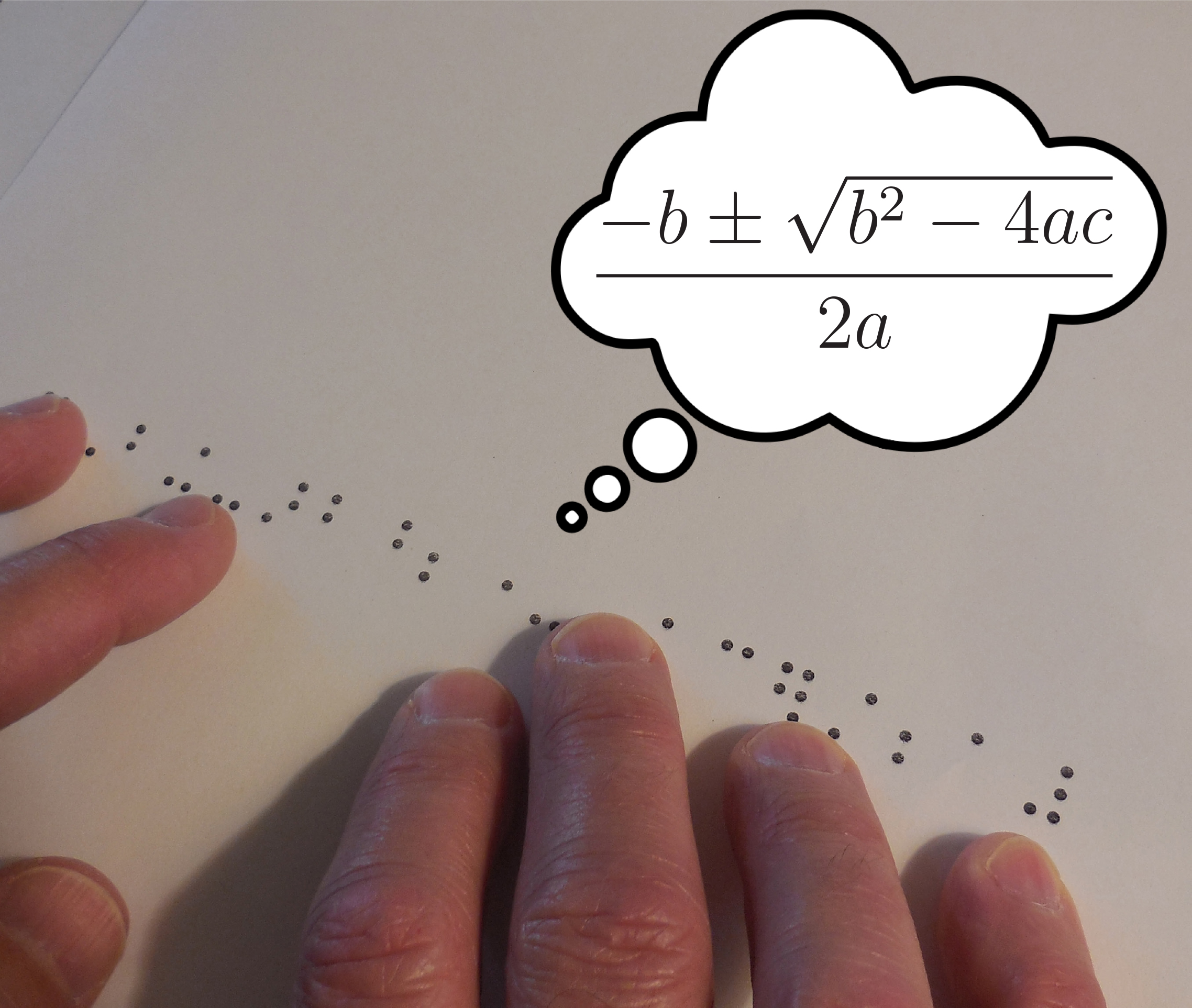 The need for automation

“Given the amazing technology available today, we thought it would be easy to piece together existing tools into an automated process,” said Alexei Kolesnikov. Kolesnikov, a colleague of Siegel at Towson University, was recruited to the project in the Summer of 2018. Automating the process is the key, because currently Braille books are created by skilled people retyping from the printed version, which involves considerable time and cost. Converting the words is easy: Braille is just another alphabet. The hard part is conveying the structure of the book in a non-visual way, converting the mathematics formulas, and converting the graphs and diagrams.

The collaboration which solved the problem was formed in January, 2019, with the help of the American Institute of Mathematics, through its connections in the math research and math education communities.

“Mathematics teachers who have worked with visually impaired students understand the unique challenges they face,” said Henry Warchall, Senior Adviser in the Division of Mathematical Sciences at the National Science Foundation, which funds the American Institute of Mathematics. “By developing an automated way to create Braille mathematics textbooks, this project is making mathematics significantly more accessible, advancing NSF’s goal of broadening participation in the nation’s scientific enterprise.”

There are three main problems to solve when producing a Braille version of a textbook. First is the overall structure. A typical textbook uses visual clues to indicate chapters, sections, captions, and other landmarks. In Braille all the letters are the same size and shape, so these structural elements are described with special symbols. The other key issues are accurately conveying complicated mathematics formulas, and providing a non-visual way to represent graphs and diagrams.

The first problem was solved by a system developed by team member Rob Beezer, a math professor at the University of Puget Sound in Washington. Beezer sees this work as a natural extension of a dream he has been pursuing for several years, “We have been developing a system for writing textbooks which automatically produces print versions as well as online, EPUB, Jupyter, and other formats. Our mantra is Write once, read anywhere.” Beezer added Braille as an output format in his system, which is called PreTeXt. Approximately 100 books have been written in PreTeXt, all of which can now be converted to Braille.

Math formulas are represented using the Nemeth Braille Code, initially developed by the blind mathematician Abraham Nemeth in the 1950s. The Nemeth Braille in this project is produced by MathJax, a standard package for displaying math formulas on web pages. Team member Volker Sorge, of the School of Computer Science at the University of Birmingham, noted, “We have made great progress in having MathJax produce accessible math content on the Web, so the conversion to Braille was a natural extension of that work.” Sorge is a member of the MathJax consortium and the sole developer of Speech Rule Engine, the system that is at the core of the Nemeth translation and provides accessibility features in MathJax and other online tools.

“Some people have the mistaken notion that online versions and screen readers eliminate the need for Braille,” commented project co-leader Al Maneki. Sighted learners need to spend time staring at formulas, looking back and forth and comparing different parts. In the same way, a Braille formula enables a person to touch and compare various pieces. Having the computer pronounce a formula for you is not adequate for a blind reader, any more than it would be adequate for a sighted reader.
It will be particularly useful for visually impaired students to have simultaneous access to both the printed Braille and an online version.

Graphs and diagrams remain a unique challenge for representing non-visually. Many of the usual tools of presenting information using color or thickness of a line, shading, etc, are not available in tactile graphics. The tips of our fingers have a much lower resolution than our eyes, so the size of the image has to be bigger (yet still fit on the page). The labels that are included in the picture have to be translated to Braille, and placed so that they do not interfere with the drawn lines. Diagrams that show three-dimensional shapes are particularly hard to “read” in a tactile format. Ongoing work will automate the process of converting images to tactile graphics.

This work is part of a growing effort to create high-quality free textbooks. Many of the textbooks authored with PreTeXt are available at no cost in highly interactive online versions, in addition to traditional PDF and printed versions. Having Braille as an additional format, produced automatically, will make these inexpensive textbooks also available to blind students. 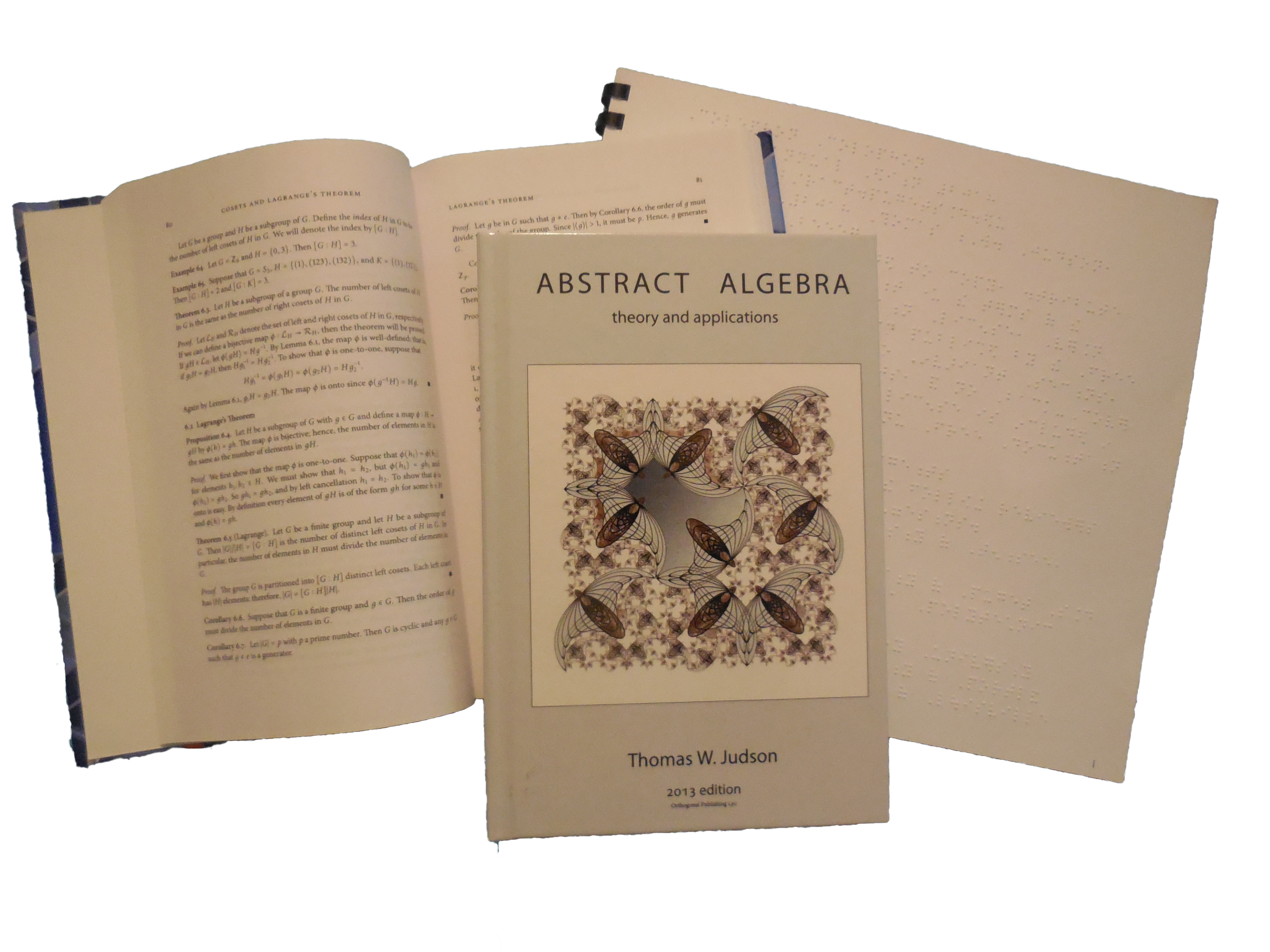 The group has begun discussions with professional organizations to incorporate Braille output into the production system for their publications.

Details of this work will be announced during three talks on Thursday, January 16, 2020, at the conference Joint Mathematics Meetings in Denver, Colorado.

The structural components are handled by the PreTeXt authoring system (pretextbook.org). Rob Beezer, a math professor at the University of Puget Sound in Washington, is the inventor of PreTeXt and also developed the enhancements to PreTeXt which were required for this project.

The Braille math formulas are handled by MathJax (www.mathjax.org), a system originally designed for displaying math formulas on a web page. Volker Sorge, a Reader in Scientific Document Analysis in the School of Computer Science at the University of Birmingham in the UK, is the lead developer for adding accessibility features to MathJax, including the recent enhancements for producing Nemeth Braille.

The production of tactile images is the most difficult problem faced in producing Braille textbooks. Akexei Kolesnikov, a math professor at Towson University in Maryland, is the lead developer for the image processing in this project. Ongoing work, including a workshop at the American Institute of Mathematics in August, 2020, will create new ways for describing images with the goal of automating the production of non-visual representations.

The official announcement of this work will be made during the following talks on Thursday January 16, 2020, at the Colorado Convention Center, room 506:

11:00am Transforming Math Documents with MathJax Version 3 by Volker Sorge

11:20am The PreTeXt-Nemeth Connection: Enabling Sighted and Blind People to Share the Mathematical Experience by Al P. Maneki

11:40am Automated transcription of a mathematics textbook into Nemeth Braille by Alexei Kolesnikov

This work was supported by National Science Foundation grants DUE-1821706 and DMS-1638535, and a grant from the American Action Fund for Blind Children and Adults, affiliated with The National Federation of the Blind. The Big Ten Academic Alliance supported the implementation of Nemeth in the Speech Rule Engine and its integration into MathJax. MathJax work was supported in part by Simons Foundation Grant, No.514521 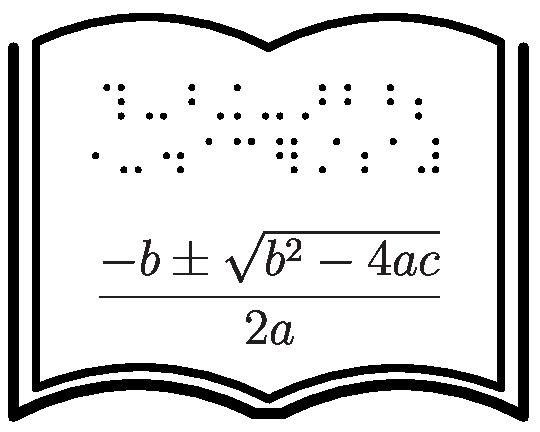